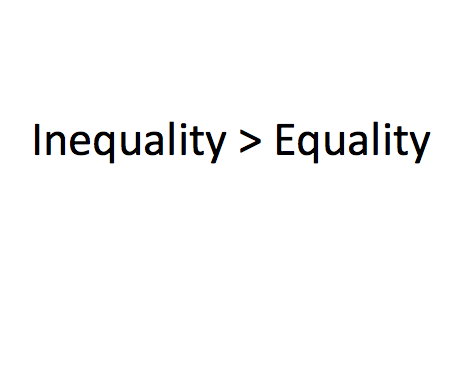 Stieglitz nails it in the review of 21st century economics from Thomas Piketty. Capitalism works. It is an efficient economic system that funnels human energy. We need success to be rewarded and failure to encourage change and adaptation.

However, we are not born with equal access to education, resources. Capitalism needs to tactfully redistribute the cards, to create a more even playing field. Financial markets and laws of gravity of business (economies of scale, network effects) are increasingly creating situations of Extremistan: the richest aren’t 10 times richer than the average worker. They are a thousand or a million times richer. This can eventually lead to situations that caused the 1789 French revolution.

Inequality beats equality in how the system rewards.

Equality is about rights. It does not require communism. It means having inequalities that are within reason and reward the “right” behaviors. There is a range of inequality that the system can bear, that is socially acceptable, rewarding for hard work and success, and economically viable, where the resources aren’t concentrated in a small percentage of the population. The system cannot work if the majority of people can’t get a baseline of education or healthcare. When inequalities become extreme and out of proportion, the economy experiences inflation, an automated regressive tax, or revolutions, which are a disorderly re-negotiation. What governments cannot orchestrate, laws of nature eventually do.