This oil-free hummus recipe positions itself in the low-fat vegan, no salt category. It is made without tahini, and includes lemon, cumin, garlic, cilantro.

Hummus makes for a tasty vegan dipping sauce as well as spread for breads and other crackers. The traditional recipe includes the use of tahini, made of sesame seeds containing mostly fat, plus added oil. This recipes removes the tahini from the hummus.

The flavor is very similar, although less nutty, as a result. You get more of taste from the garbanzo beans, cumin and lemon juice. I also refrained from adding salt to this recipe, in the spirit of reducing total sodium intake from the average modern human consumption. It is an easy add, should it be needed for your purposes.

We had this oil-free hummus with fresh vegetables on a large plate and bowl, the day of the Superbowl. It was a hit and a change from the chips dairy sauces usually associated with this event. Hummus is a very social recipe, and just like less oil sets the stage for a fun meal, friends set the stage for a day well spent.

Vegetables we used: carrots, celeri, radishes. Later on, we did a variation of this hummus using black beans. Check it out. 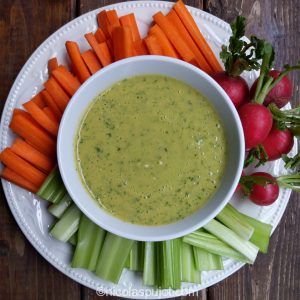