The main ingredient in a French fricassée is traditionally potatoes. This dish is a staple of French cuisine, and can be made adding various extras, like an egg, bacon, lardons, or keeping it simple and plant-based with just the potatoes, onions and/or garlic, and your choice of cooking oil. This sauteed beets recipe variation produces the same fricassée concept, substituting potatoes for beets.

I usually make beets in salads by boiling them and combining them with a dressing, sometimes adding greens such as kale, both of which contain plenty of nutrients. In this case, sauteed beets are fried in oil, so it’s important to keep the temperature reasonable to remain under the oil’s smoke point. By rinsing the beets after peeling the outer skin, they were slightly moist, which added a small amount of water to the pan, and this very modest liquid quantity prevented overheating and sticking. Covering the pan with a lid helps.

Also, it is a good idea to slice your beets relatively thin so that they can cook faster, and taste them after 15 minutes to see if they are fully cooked or need a few extra minutes. They tend to need more time when being sauteed, compared to traditional boiling. Finally, if you like spicy sauces, they make a tasty complement once served. Try, for example, adding a few drops of Tabasco hot sauce or Sriracha. 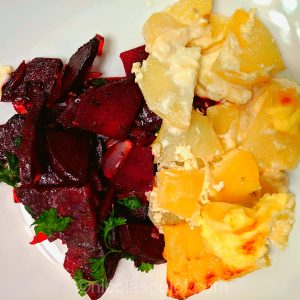