To change a little from the previous mushroom zucchini and baby kale vegan pizza, which I made with tomato sauce, today’s lunch recipe uses barbecue sauce. These BBQ pizzas can be vegan since the sauce contains no animal product. To stay in the target plant-based, low fat theme, this Vegan eggplant bell pepper BBQ pizza recipe also does not add any oil.

To enhance the flavors, we used several dry and fresh herbs, as well as hot sauces. On the pizza itself, I added some thinly sliced pieces of onion as well as dry oregano. The BBQ sauce already provided plenty of spice, and this created a new dimension.

Once baked, we sprinkled some chopped fresh basil, and everyone could top some extra spice on their plate that they liked. Hot sauce was one option, with the featured photo here showing sriracha.

Personally, I wanted a little extra moisture but felt the pizza already had enough spices. So I sprinkled a few drops of balsamic vinegar on this vegan eggplant bell pepper BBQ pizza, and this accomplished both goals. 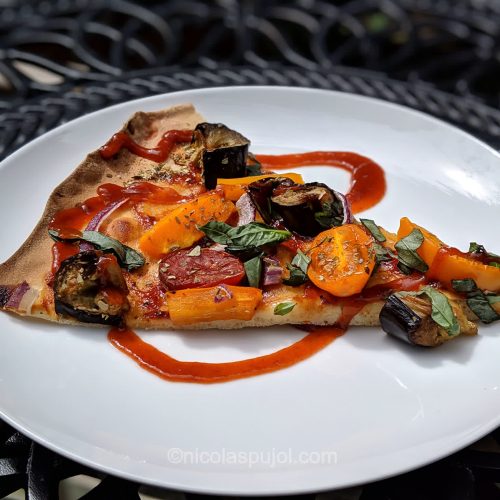