As much as Westerners have a hard time eating some of the most amazing ingredients of Japanese foods like natto, sushi has conquered the planet. What do people think about first in Japanese cuisine? It would be an interesting survey to run, and I bet sushi would be close to the top of the list.

The inspiration for this dish came by chance. Don’t so many things in life happen by chance? In order to store baked beets in the fridge, I combined red and golden beets together in a single container. When I opened the container the following day, the red pigments had colored the golden beets.

It did not catch my attention until I only had one half golden beet left, and also cold, cooked brown rice.

Hey, why not try to make a vegan sushi with the rice? It is not sushi rice, but it’s cold and slightly sticky, plus the golden beet would do well with its colors and texture as a fish replacement.

So here we went. The rest was just simple assembly and decoration with some green leaves on the side. We had soy sauce and wasabi, which helped put together the final dish.

I was surprised that the beet worked so well as a fish substitute. Granted, it is not as fatty as some of the fish, and obviously does not contain the same nutrients. But other than that, once you add the soy sauce and wasabi, the flavors in your mouth are quite comparable.

For this recipe I used brown rice instead of white sushi rice. I also omitted the vinegar in the rice, and only added a tiny amount of avocado oil. So for the future, I might try to use white rice, vinegar, and red beets. Wouldn’t this match the color of tuna so closely?

Plant-based aficionados will perhaps find that flavors work even better. At any rate, once you have a batch of brown rice, the key factor is for it to get cold enough and sticky enough to hold its shape as a nigiri base. You may need to press it hard a few times for grains to stick, and while cooking the rice, a tiny bit of oil may help the consolidation. Cold oil gets firm.

With soy sauce and wasabi, your beets will look and taste like sushi. And rhyme too. 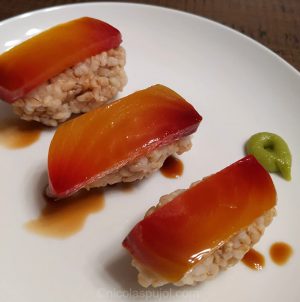