A spicy and unusual appetizer for the adventurer: this nagaimo appetizer with Motoko’s spicy wasabi soy sauce features small bite-size pieces of the Japanese mountain potato (yam) and topped with parsley.

I was getting vegetables at our local Asia grocery store, Uwajimaya, last week. They carry a variety of ingredients from the region year round, and some only seasonally. I came across naga imo’s and found them intriguing. What’s a naga imo? The long root is a type of potato which grows in mountain areas of Japan. So I decided to buy a few.

Unlike regular potatoes, I noticed that nagaimo can be eaten raw, so this appetizer was an experiment. I bought these nagaimo very fresh, beautifully looking. The roots had uniform skin color, and were very white and slightly juicy on the inside. As a first impression, the sliminess of the nagaimo made me think of natto: both look like slimy, plant products, from Japan. That’s a lot to share in common, as I considered natto to be unique in its texture and origin.

The nagaimo is peeled, rinsed, and sliced thinly into small bite size pieces.

To add flavor, I used my friend Motoko’s spicy wasabi soy sauce, to use Japanese ingredients in the dressing as well. Parsley and a little bit of chopped red onion, on top, come as decoration and for a touch of fresh herbs and extra flavor.

This dish makes an appetizer which changes from the usual flavors. I found the nagaimo to have a radish-like texture and spiciness, in addition to the sliminess of the potato even after being well rinsed. It takes being adventurous to enjoy raw nagaimo, and even as such, I would not recommend eating more than a few bites. It gets filling quite fast, and the spiciness is meant for small quantities as well.

I hope you have fun trying this nagaimo appetizer, and other nagaimo recipes, such as the fries! 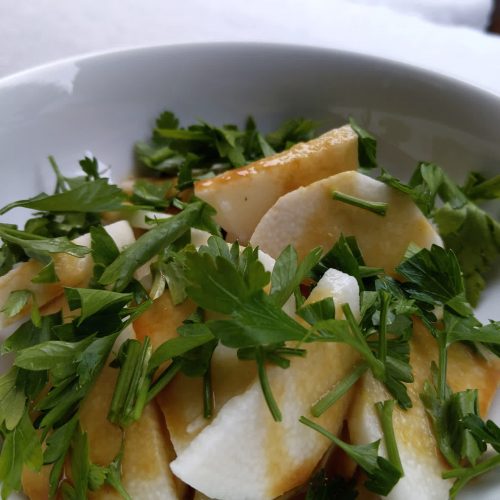